Artist Q & A with Roger Ballen

Photographer Roger Ballen discusses the evolution of his work.

Roger Ballen was born in New York City in 1950, and moved to Johannesburg in the early 1970s, where he produced a series of photographs documenting the rural communities of South Africa. Beginning in the 1990s, he gravitated toward a more surrealistic visual style, incorporating aspects of painting, drawing, and sculpture into his work. His photographs have been exhibited in institutions worldwide, including at the Fotomuseum in Munich, Germany; the Johannesburg Art Museum in Johannesburg, South Africa; the Musée de la Photographie in Charleroi, Belgium; and at the Victoria and Albert Museum in London, England. Ballen currently lives and works in Johannesburg, South Africa. Sara Carson: How would you describe yourself and your work?

Roger Ballen: I am an artist who has been using black and white film over the past 45 years. My photographs have evolved from being partly documentary to uniquely stylized, integrating aspects of painting, drawing, and sculpture through the lens of a camera.

SC: What kind of artistic training do you have?

RB: My mother worked in Magnum in the late 1960s, and later started one of the first photography galleries in New York City. As a child, through this association, I was exposed to such historical figures as Andre Kertesz (American/Hungarian, 1894–1985), Henri Cartier-Bresson (French, 1908–2004), and Edward Steichen (American, 1879–1973).

SC: What are you trying to communicate with your art?

RB: My photographs are fundamentally psychological in nature. Through my work I am attempting to define hidden parts of myself. Hopefully, my imagery will elicit a similar response from the viewers. 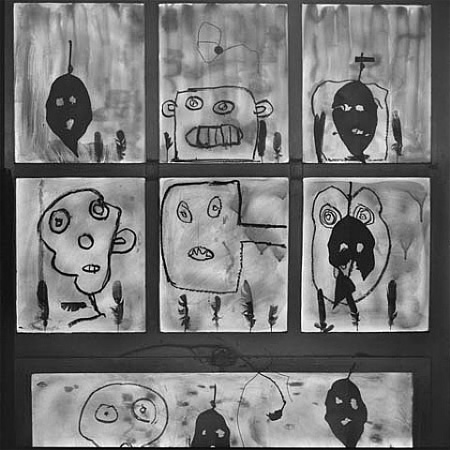 SC: Describe your creative process. What kind of creative patterns, routines, or rituals do you have?

RB: I work in Johannesburg, South Africa, usually six afternoons a week. My projects typically take five years and culminate in a book. Thames and Hudson will be publishing my latest, titled Asylum of the Birds, in early 2014. SC: Do you ever experience artist’s block? If so, what do you do to overcome it?

RB: The best and only way to overcome artist block is to work regularly in a disciplined fashion.

SC: Describe your studio or workspace.

RB: The Asylum of the Birds space was shot in a large, multi-story house in Johannesburg. The owner of the building allowed wild birds and other animals to roam freely around the place.

SC: When is your next exhibition? Why should we come?

RB: In mid-June, the Smithsonian National Museum of African Art opened an exhibition of mine titled Lines, Marks, and Drawings through the Lens of Roger Ballen. This show focuses on the evolution of drawing and painting in my photography over the past 40 years. It closes in mid-February 2014. SC: Has the Internet dramatically changed the dynamic of your business?

RB: As I live in South Africa, far away from major art centers, the Internet has been crucial in the development of my art career.

SC: Do you collect art yourself? If so, tell us about your collection.

RB: I collect objects I find in flea markets, on my travels, and on the street. I believe that one does not have to go to museums or galleries to see or discover art.

SC: If you weren’t making art, what would you be doing?

RB: I have a doctorate in geology and have worked in this business for 30 years while pursuing my photography. I love working with the earth and would definitely have continued full time in that career.

SC: Are there any creative mediums you have always wanted to pursue but haven’t yet?

RB: I am interested in directing more videos. My latest, I Fink U Freeky, has received over 32 million hits on YouTube. Prestel Random House will be publishing a book in September 2013 titled Roger Ballen/Die Antwoord, I Fink U Freeky.

SC: If you could have dinner with any three artists, living or dead, who would you choose?

RB: I would choose a great traditional artist from Africa and New Guinea, and an American Indian.