Nazis and Kimonos: An Artist’s Ancestry

Discover the provenance of an inherited collection of Japanese Netsuke. Edmund de Waal’s memoir, The Hare with Amber Eyes, is an artist’s attempt to understand the objects he owns, creates, and inherits. De Waal (British, 1964) is a trained potter who has been working at his wheel since childhood; he was most recently a professor of ceramics at Westminster University. In 2011, he was awarded an OBE from the British government for his contribution to the arts, and became a trustee at the Victoria and Albert Museum in London. In this memoir, one follows de Waal on a journey to understand his inheritance of a collection of Netsuke and the ancestors who left them behind. Netsuke, small Japanese carvings made of ivory or wood, once served a purpose as fasteners on kimonos worn by Japanese men and women, but when they enter de Waal’s story, they have become objets d’art, a curiosity of the current fad of Japonisme in turn-of-the-century Paris. De Waal’s family hails from the Ephrussi clan, a prosperous Jewish banking family whose prominence came about in 19th-century Odessa, Paris, and Vienna. The Ephrussi art collection is now widely dispersed in museums and private collections, with items still coming to auction. In early 2013, a painting once owned by Michael Ephrussi (a distant cousin of de Waal’s) appeared in a Sotheby’s Old Master Paintings and Sculpture sale. The Netsuke’s story begins in 1870s Paris, when they were bought by another relative, Charles Ephrussi, a prominent art collector and scholar whose home boasted works by Manet, Monet, and Renoir. His Netsuke rested in a vitrine until it was sent to Vienna as a wedding gift to de Waal’s great grandfather. He presented them to his new bride, and they were thus displayed in her dressing room in their Viennese grand palais, until the Nazi invasion of 1938. The Nazis confiscated all of the family’s art and valuables; however, distracted by the home’s more blatantly opulent objects and artworks, they overlooked the small foreign objects that were the Netsuke, and this oversight guaranteed the safety of the carvings. Over the span of a couple days, as the Nazis systematically categorized and redistributed the house’s grander pieces, a loyal servant secreted them out of the dressing room one by one. From there, they traveled to England, and later, back to their homeland of Japan. De Waal’s quest begins when he firsts encounters the Netsuke in his uncle’s home in Tokyo. 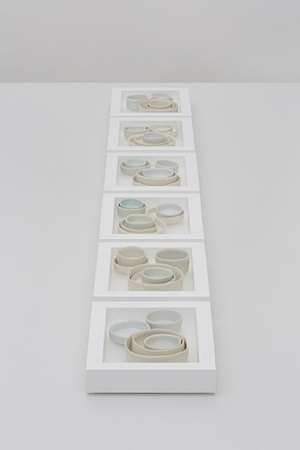 De Waal’s own style of work is simple and refined, and could be compared with the more Minimalist designs prevalent in Japanese culture. His relation to Japan is not limited to the Netsuke, for he has studied ceramics and the Japanese language, an event that brought him and the Netsuke collection together. Although de Waal’s work is of a more simplistic nature, it embraces the possibility of chance encounters. His ceramics have been shown in opulent settings, museums, and private spaces; these pieces have been stacked, piled, and placed, used as utilitarian objects, and put away as objets d’art. Just like the 246 Netsuke whose provenance he has tracked so diligently, in A Hare with the Amber Eyes, a tale that took the artist from Japanese kimonos to Parisian salons and Viennese dressing rooms, his ceramics will travel, be personified, or perhaps sit idle until rediscovery.

De Waal currently has works shown at the New Art Centre in Wiltshire, England. His first New York exhibition is planned for fall of 2013 at the Gagosian Gallery.

Lauren Stephen is a production editor for the artnet Price Database.