Acclaimed for their work in the Minimalist and Pop movements of the 1960s and 1970s, Ted Stamm (American, 1944–1984) and Idelle Weber (American, b.1932) are catching our eye today with solo exhibitions opening at Marianne Boesky Gallery and Hollis Taggart Galleries in New York. By incorporating their personal touches and identifying features, these artists expand our visual language and knowledge of two major movements of the 20th century.

At their Madison Avenue location, Hollis Taggart Galleries presents a solo exhibition of over 60 paintings that detail Idelle Weber’s development as a Pop artist. Weber comments on social life and commercial imagery through her use of form and color; these ideas were of keen observation during the Pop movement. Through the silhouetted figures that typify her work, the artist gives shape to observed scenes of corporate and social life.

In Lever Building 2, Weber uses repeated frames and architectural structure to portray the “alienation and conformity of corporate culture.” 1 The “ad men” in her scenes are dressed in suit and tie, giving the viewer an idea of their social standing, and highlighting the lack of female characters in a powerful role. Marianne Boesky Gallery in Chelsea presents a survey of Ted Stamm’s works from 1973 to 1981. Stamm merged movement and speed with a Minimalist sensibility, and used happenstance and personal identifying features to give direction to his work. The artist studied the movement of a rolled dice or used familiar shapes found in his everyday life to bring structure to his work; he allowed his studied surroundings to become a basis for his artistic investigation. In pieces like 78W-4 (1978), we see Stamm’s continued interest in speed and movement, which was particularly inspired by trains and airplanes. The blunt “supersonic” forms have an obvious connection to a Minimalist aesthetic, but also speak to artistic studies of the past, like the Italian Futurist investigation into movement. 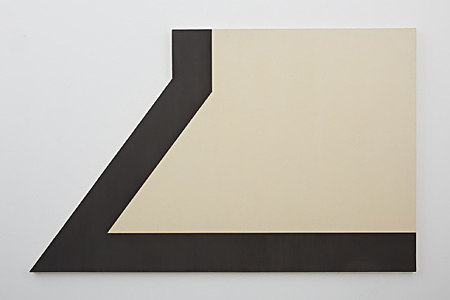