Part one of a TEFAF presentation about top performing artists.

Today’s art industry is starting to look more and more at performance in the art market, through such perspectives as the TEFAF Report. When buying and selling art, we are starting to evaluate pieces by their performance and investment potential, in addition to their art historical importance and exquisite execution.   We in the art world are well versed in how we discuss art in terms of historical importance. TEFAF offers pieces of history, whose stories are inextricably intertwined with the objects themselves. However, how we choose to discuss and examine performance with art is changing and can ultimate drive us to differing, often conflicting conclusions. In much the same way stock analysts use multiple sources of information when advising on a buy or sell decision, so too must we in the art market be open to consider a wider field of information in order to make educated decisions. This is not to say that the art world is unaccustomed to using data as a decision-making aid. The principle of using recent sales histories is not new. For years, the vast majority of basic data analysis has been conducted to examine recent comparable sales, in an effort to aid estimation for upcoming sales. artnet Analytics allows subscribers to look beyond small, selected data sets, and start analyzing markets through more in depth measures, such as average sale prices and number of works sold, which are all important metrics to consider. artnet offers advanced art market analysis through our Custom Report service and the more immediate online Analytics Reports, both of which played a vital role in contributing to the 2012 TEFAF Report. The art market is not adverse to data analysis and, over time, has started to embrace more sophisticated market analysis tools. This data allows us to evaluate which artists are the top performers. To better understand what is meant by top performing, it is necessary to examine on a deeper level and factor in a variety of relevant market indicators. The art market is unique in many ways; much like any other market, there are certain fundamental truths that can be examined, and other mitigating factors. One of the more often used barometers of success or performance is annual sales statistics. However, these results can change significantly on a year by year basis. Using this method, artnet Analytics has produced the following list of the top 10 artists by total sales by value: Top 10 Artists by Total Sales Volume in 2012 1. Andy Warhol 2. Pablo Picasso 3. Gerhard Richter 4. Qi Baishi 5. Zhang Daqian 6. Mark Rothko 7. Li Keran 8. Francis Bacon 9. Jean-Michel Basquiat 10. Xu Beihong It is important to note that one year of strong sales does not necessarily indicate a lifetime of top performance. Going back 100 years, or even 10 years to 2002, would result in a completely different set of artists: Top 10 Artists by Total Sales Volume in 2002 1. Pablo Picasso 2. Peter Paul Rubens 3. Andy Warhol 4. Claude Monet 5. Alberto Giacometti 6. Fernand Léger 7. Henri Matisse 8. Edgar Degas 9. Gerhard Richter 10. Paul Cézanne By comparing both sets of charts and graphs, it is evident that you can better evaluate an artist’s performance by using data from a time range as opposed to a specific year. Top 10 Artists by Total Sales Volume in 2002 to 2012 1. Pablo Picasso 2. Andy Warhol 3. Zhang Daqian 4. Qi Baishi 5. Claude Monet 6. Francis Bacon 7. Gerhard Richter 8. Alberto Giacometti 9. Henri Matisse 10. Mark Rothko 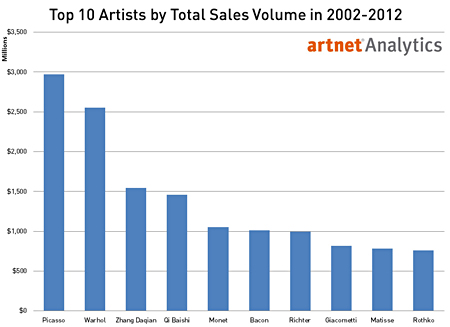 A select few artists are repeated in each of the three charts; this indicates a degree of stability in these artists’ performance. However, there have still been fundamental shifts over the past 10 years. By looking over this time period, we have been able to more accurately reflect a macro interpretation of the top performing artists according to total sales by volume. Top 10 Artists by Total Lots Sold in 2012 1. Pablo Picasso 2. Andy Warhol 3. Joan Miró 4. Marc Chagall 5. Zhang Daqian 6. Pu Ru 7. Qi Baishi 8. Salvador Dalí 9. Léonard Tsuguharu Foujita 10. René Lalique The results indicate a shift over time, and on further examination we can start to identify artists who appear in both measures of performance, value and volume. By looking at sales volume by value and lots sold together over the past 10 years, we can see that Henri Matisse, for example, dropped 26 places as judged by total lots sold, despite the fact that in 2012, 69% more lots were sold than in 2002. He also dropped by 32 places when looking at total sold by value, even though the total value went up, going from US$36 million in 2002 to US$44 million in 2012. Conversely, Andy Warhol was much more stable over the same period, and saw wide spread improvement. In 2002, he sold a total of 604 lots, and in 2012, he sold 1562 lots. His total value sold was US$75 million in 2002 and US$380 million in 2012. His standing improved by two places in each measure of performance. Contemporary sculpture also saw improvement, with Alexander Calder jumping from US$12 million in sales in 2002 to US$149 million in 2012, and Henry Moore increasing to US$91 million in 2012 from US$5.2 million in 2002. The other major shift comes from important Chinese artists, who saw some of the most significant increases over this 10 year period. Between 2002 and 2012, Zhang Daqian sold US$1.5 billion, with the lion share of that selling in the past five years. Zao Wou Ki sold US$426 million, again mostly in the last few years. These figures offer a very clear indication of how much the art market has shifted over the past 10 years. By looking at these graphs and charts, it is clear that money is being focused on the Contemporary and Chinese markets, and enthusiasm in Impressionist and Modern Art is decreasing. To learn more about the artnet Index generation system and the calculation involved, read the complete artnet Indices White Paper. Create your own Analytics Report.